The new black sand beach at Isaac Hale Beach Park remains a popular attraction for tourists and residents alike a year after it began to form from the 2018 Kīlauea eruption.

While the beach, which isolated Puna’s only boat ramp and essentially filled in Pohoiki Bay, provides a needed recreational respite following the disaster, it also created additional hazards that have kept Hawai‘i County lifeguards busier than usual. 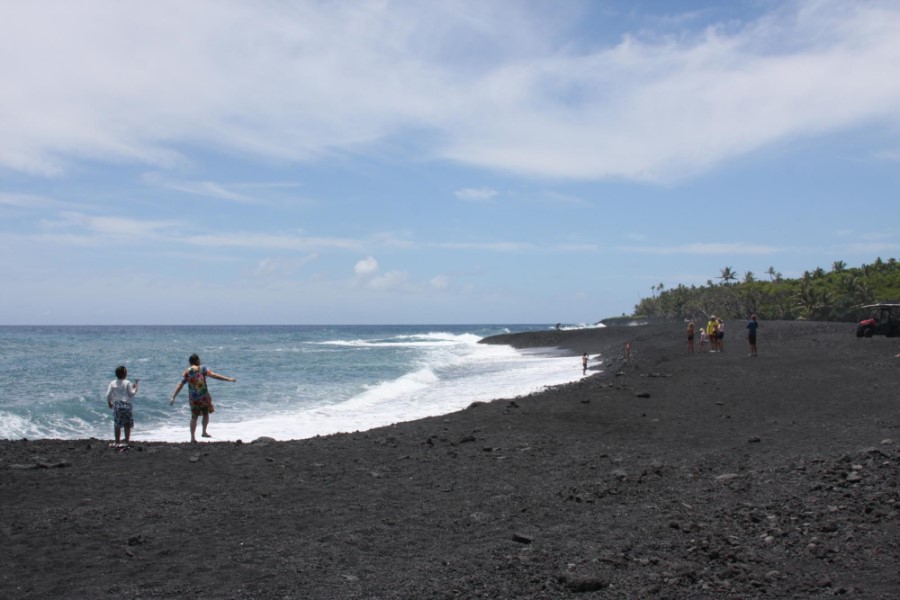 Mark Collins, a senior lifeguard assigned to the park, said hazards include an undertow that didn’t exist before. He recommends visitors talk to lifeguards, known as water safety officers, before getting into the water, and that parents should stay with keiki at all times.

“The people, locals, aren’t used to the way it is,” Collins said. “Before the lava flow, there were reefs that formed surfable waves. Now the reefs are covered, and the swells directly hit the shoreline. “

He has the numbers to back up the caution. Since the park reopened in December, there have been nearly 100 rescues. Previously, less than 20 rescues in a year was normal.

The loss of several surf spots in the area has caused some to venture over to “third bay,” which he referred to as the “big wave surf spot.”

“We’ve had a couple close calls with people who don’t belong at third bay wanting to give it a go,” he said.

The beach hasn’t stopped growing and the shoreline remains in flux. One lifeguard station is now at least 200 feet from the shoreline and will have to be moved.

“We don’t have a constant bottom,” Collins said. “The cliffs keep eroding,” he added. “We’ve lost 30 to 40 feet of cliffs down there.”

Efforts to keep people safe have been aided by lifeguards switching to 10-hour shifts, from 7:30 a.m. to 6 p.m. Each lifeguard works four days a week; the beach is staffed daily.

Collins also recommends visitors bring their own water since water lines to the park were disrupted by the eruption. He said people should avoid venturing out on the lava flow field.

Without water service, the county Department of Parks and Recreation has had to close the park’s restrooms. Portable toilets are being provided, and the department is finalizing a plan to install a hand-washing station.

This will be accomplished by installing a water tank that will be filled by a water hauling service as needed. The department continues to research feasible solutions to bring potable water to the park, which would supply water to the restrooms.